"A life not examined is a life not lived" – Socrates

At last, the house is sorted (don’t look at the back of the garden – when I said,”house”, I meant it) the last of my work commitments is complete and the first steps on the road to a business start-up next year have been taken. It’s therefore time to get serious about my dreams of visiting Granada and the Alhambra in Southern Spain. 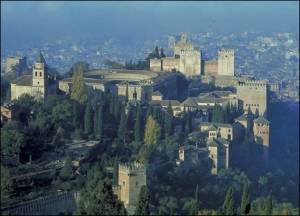 Now, I don’t know about you, but for years, all my holidaying has been done by either car (within the UK) or plane (anywhere else). The result is that my personal globe is made up of small spots of intense, concentrated experience asurrounded by huge tracts of vague impressions from scchoolboy atlases, national geographic and others’ travel stories. As for the journeys between, they tend to involve long periods of intense concentrated discomfort, surrounded by vague impressions of equally discomforted fellow passengers, cramped toilets and films on too-small screens that distract but (largely) fail to satisfy.

So, this time, I am seriously considering a land route – having listened to my friend Macarena’s advice about coaches and spanish roads, it will probably be the train. Current thinking is to go in the last two weeks of November, making sure I have time for a week, at least in and around Granada, with stops in Paris and Madrid on the way there and/or back. But I’d really like to spend part of the time there in company… who can I ask?

... to a blog that is dedicated to getting out more and giving life a chance to impress and make you question what it's all about...

I also have another blog, which mostly deals with comments on politics, social and current issues - you can find it at http://www.halfinsight.wordpress.com/

The Insolvency (England and Wales) Rules 2016

Discussion about the new rules and their commencement

Romancing the planet; a love affair with travel.

Walk and Bike in France and Europe www.walk-bike-camino.com

The Nirvana of travel, shopping and spirituality...

Life Through A Lens

Small steps towards a big difference

everythingelseandi is about all the things that matter in my life!!!!! love, laughter, clothes, shoes, pets, music, art, culture, travel and everythingelse and i.

The world's most unplanned adventure

Fractions of the world

Flight of the Condors

A journey through South America

6 months in the hills of Snowdonia. Living in a stone cottage with no electricity, heating or running water, we are getting our warmth through the winter by running, hill walking and blogging!